There were very little photographic activities in the first quarter of 2016.  I injured my back early this year which took more than 8 weeks for me to completely recuperate from the pains.  I could visit only two macro sites, one at Zhenghua Forest before I hurt myself and a night shoot at Chestnut Nature Trail after I recovered from it.

At Zhenghua Forest, there were many different species of grasshoppers.  Hence, I was not surprised to find these two friendly ones resting happily on the same dewy perch.

But I was certainly amazed to find three giant millipedes doing some kind of business together. Were they Mating? And why three of them? After about 15 minutes or so, each went their separate way. 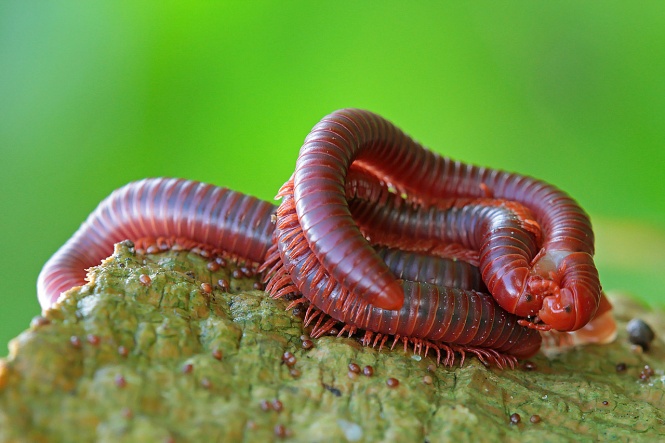 It is not uncommon to see moulting of leaf-footed bugs as there were so many of them here.  The nice colour contrast of this image is really pleasing to the eyes.

Not too sure about ID of this wild flower but they are attractive to me especially when filled with morning dew.

Night macro photography is not really my specialty but occasionally I would join my friends like this one at Chestnut Nature Trail on 25 March 2016. At night, you would come across different insects that you use to see during the day such as stick insects which only come out at night to feed. We found 2 different species:

Someone spotted a moth’s caterpillar in a pupating position and a green chrysalis probably belongs to one of the butterflies from the Baron’s family.

A pair of Brown Marmorated Stink Bug was found high up on a leave. Always a challenge to shoot subjects above eye level.

The catch of the night was this photogenic Oriental Whip Snake.  This was a juvenile about a metre long.  Adults can grow up to 2 metre and in almost fluorescent green colour.  It was my first time seeing a light brown oriental whip snake.